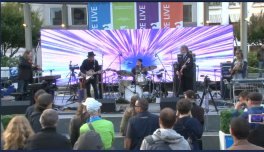 According to Moonalice legend — and today’s poster by Darrin Brenner — the sun is shining brighter today. You may have seen the news that the basketball team from across the bay — the Warriors — won the NBA championship last night. There is much joy in our community, as the Warriors last won a championship forty years ago … during the administration of Gerald Ford … which is to say, only ten years after the first Acid Test and the formation of the Grateful Dead and Jefferson Airplane. I’m pretty sure that dinosaurs still roamed the earth in 1975. When it comes to sports, the Moonalice tribe cares mostly about baseball, but we’re open minded, especially when it comes to teams as unusual and exciting as the Warriors. Our tribe has traditionally preferred to watch basketball, rather than play it, as we have found that jump shooting buds into bongs usually ends badly. But the truth is that we are happy about the end of basketball season. This means for the next month or so we can enjoy baseball without any distractions. 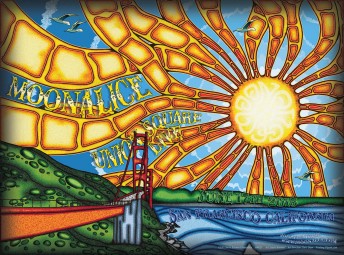