According to Moonalice legend, it's not every day a band has its tenth anniversary. For us, that is particularly true. We are celebrating our tenth anniversary today, but the actual anniversary is Cinquo de Mayo. In a coincidence that foretold so much about Moonalice, our first show was a medical marijuana event in Civic Center Plaza in San Francisco. Today's poster by Alexandra Fischer depicts Tenspot Moonalice, our first groupie. Ten'spot was named for the currency her father won in a pool to predict the time of her birth, but eventually she added an apostrophe to the first syllable as part of a branding campaign for her unique strains of cannabis. Try some!

To celebrate, we have gift for you: we're going to play a free show in Union Square on Wednesday! Our first Union Square show of the year will run from 6-8pm!! Please spread the word!

Notes:
We played this concert to honor the memory of our friend and poster artist, Dave Hunter, who died earlier in the day from brain cancer. We learned later that our fan John Bergan had died of a heart attack. 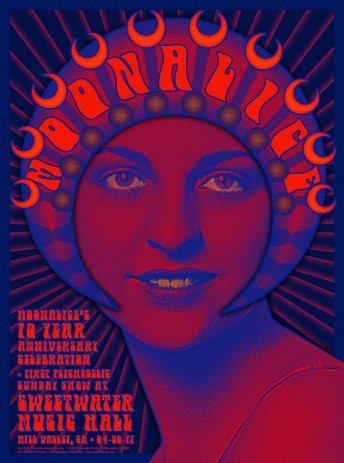