According to Moonalice legend, the astonishing rainfall of recents months has led to some interesting discoveries. Legend has it that under the bottom floor of the garage beneath Union Square was a previously unknown body of water, the Mermoon Sea. As depicted into this evening’s poster by Carolyn Ferris, the rainfall overwhelmed the city’s drainage system, causing the Mermoon Sea to rise. All the happy Mermoon creatures suddenly found themselves on level 4 without a parking ticket. They don’t have any cash — only Mermoon Sea weed — so we’re going to bail them out after the show.

Hallelujah played in memory of Herb Sandler, a progressive philanthropist with a heart of gold. 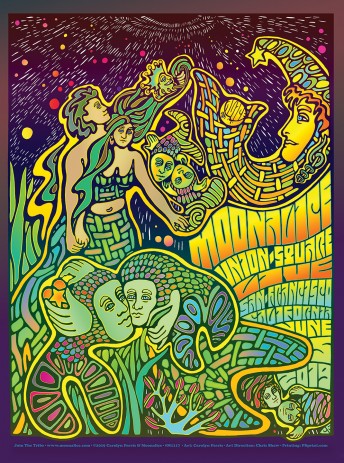