According to Moonalice legend, the 22nd of June is Hangover Day. It is a day traditionally dedicated to recovery and contemplation.

Moonalice tribal celebrations of the summer solstice on June 21 and Midsummer on June 24 have been boisterous affairs since the dawn of time. Because it comes first, the solstice benefits from getting the tribe when everyone is fresh. Of course they don't stay that way for long. Not surprisingly, each Solstice brought with it an oversupply of headache and nausea, necessitating the creation of a DIFFERENT KIND of festival on June 22 to deal with it. But Hangover Day was nothing more than a bunch of barfing and whining until some good Samaritans from the Haight-Ashbury clan stepped forward with a concept they called Rock Med.

Rock Med was an amazing idea. If people are hurting, don't judge them. Help them.

The tribe immediately saw the brilliance of Rock Med. Rock Med meant you could party without fear. The certainty of recovery from Solstice celebrations . . . ensured readiness for the equally intense Midsummer party on June 24. 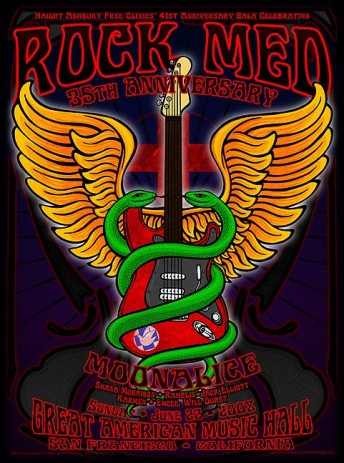