According to Moonalice legend, the project that created the New Sweetwater began with an international architecture competition.  The world's greatest architects were invited to submit proposals.  Mies van de Rohe's was rejected for being too square.  Frank Gehrey's was rejected because no one could figure out how to get in. Today's poster by John Seabury depicts the submission of a less well known architect, Sliderule Moonalice.  It drew support for being shovel-ready, but lost it when someone pointed out that horse manure is also shovel ready.  In the end, the owners went with design we see here today. 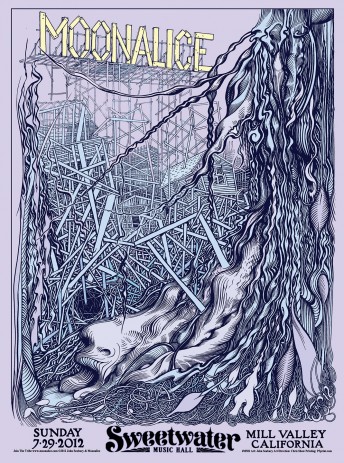