According to Moonalice legend, in the beginning there was the blues. Then jazz. Then rock 'n' roll and the British Invasion. Then came 1965 and the Charlatans. The Charlatans got the San Francisco music scene started. Without them, we would not be here tonight. On June 21, 1965, the Charlatans began a residency here at the Red Dog Saloon which was notable for at least two things: the band took LSD before the show and printed a psychedelic poster. While its possible that another band had taken LSD at a show before that night, there is no doubt that the poster - now known as The Seed - was the beginning of psychedelic poster art. Tonight's poster by Dennis Loren is an homage to The Seed. This show is an homage to the Charlatans.
***
We dedicated this show to our friend Joe Winslow.
***
No pedal steel due to lack of room on the stage. 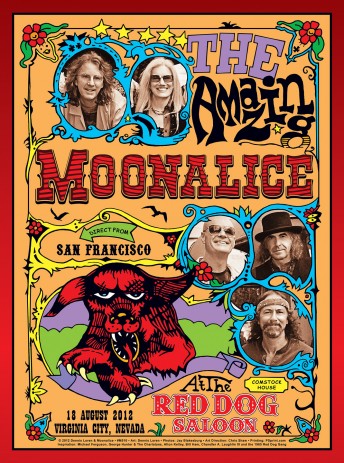