According to Moonalice legend, today's poster by Alexandra Fischer depicts the legendary Union Square Telescope, which was built on this very spot in 1850 with some of the proceeds from Sutter's Mill. The telescope was popular with scientists - who used it to see the moon and stars - and peeping toms, who checked out guest rooms in the old St. Francis. The basement under the telescope was used by the army to store explosives. When the earthquake hit San Francisco, dynamite exploded, launching the telescope - and several citizens - into outer space. By chance, they landed on the moon, where they have prospered ever since.

A beautiful evening and a great set by Moonalice. As I'd been doing since he passed on August 2, I carried a photo of my dear friend Jim McCaffrey in my pocket, taking it out to look at him from time to time. When Pete started to play, "Stella Blue", I thought perhaps it would be the song that made me 'lose it' in remembering Jim and his love for the band and that song. But, much to my surprise, there were no tears - just joy at the wonderful musicianship and passion with which the band played it that day. Thank you, Moonalice.

love it as always gents, groovy audience too 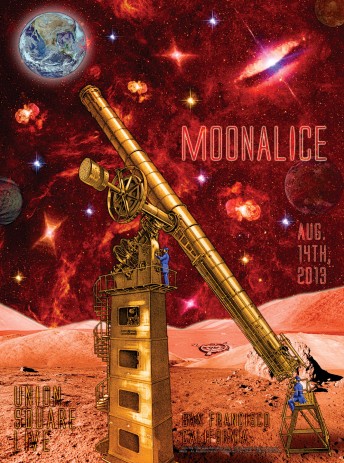