According to Moonalice legend, the Coal City Tavern is home to some of the hottest players in central Pennsylvania. The hottest of the hot is Luzerne Moonalice, a red hot dragon with a fiery personality. As depicted in tonight’s poster by Alexandra Fischer, Luzerne, who is known to her friends as Lu, is famous the world over for her ability to swallow swords, juggle plants, and smoke bales of fine herb … all at the same time. That is a real talent. We expect Cirque de Soleil to call her any day now. If you are interested, Lu will be giving a master class after the show. We would recommend you show up in the parking lot, armed with your own herbal product, because Lu does not supply. 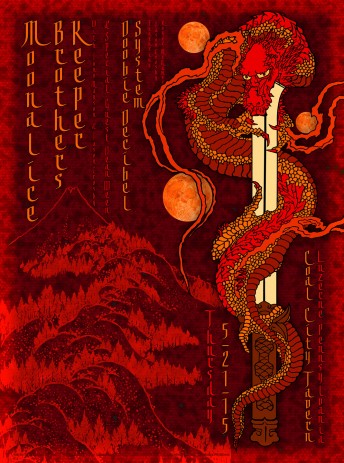