According to Moonalice legend, all roads lead to Woodstock. Members of the Moonalice tribe dream of coming here to Levon’s barn … we will do whatever it takes to get here. Tonight’s poster by Gary Houston illustrates one of the most famous member of our tribe, attempting to ride here on a bicycle. The date was April 19, 1943 – known in our tribe as Bicycle Day -- and Dr. Hoffman attempted to ride here from his lab at Sandoz Pharmaceuticals in Basel, Switzerland. You see, Dr. Hoffman had invented LSD and had just taken some himself for the very first time. He had visions of a Midnight Ramble at a barn called Levon’s. He got on his bike determined to ride there, without fully anticipating the challenge of crossing the Atlantic on a bicycle. Fortunately, he made it home in one piece. The rest, as they say, is legend.

Notes:
Happy Traum played guitar and sang "In the Pine" and "Stealin'"
John Molo played drums on "Meet the Boys"
Moonalice played on "The Weight"

What a hot set! Thanks guys. We miss you Levon 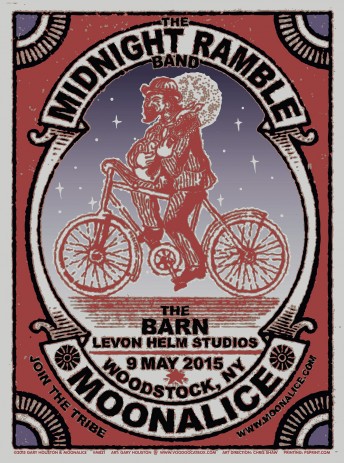