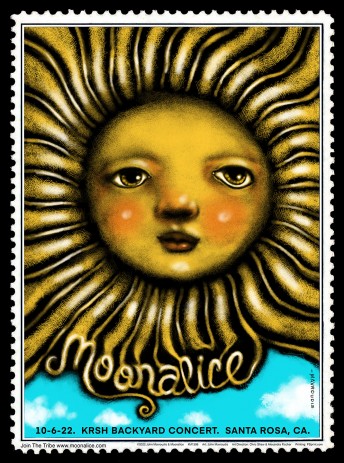 Oct 6, 2022 / KRSH Backyard Concert (Rescheduled from Sep 8) (Santa Rosa)
According to Moonalice legend, this gig was supposed to happen a month ago, but climate change had other ...
view »

According to Moonalice legend, the Bassett hounds is the official hound of the Moonalice tribe. Some would say that we see ourselves in bassetts ... with their huge ears and feet, droopy jowls, and loose skin. Tonight's poster by Gregg Gordon provides the real story ... with genuine evidence of a legendary kind. Moonalice archaeologists were rooting around in the cellar here at Havana when they found a painting on the wall. It depicted Pokito Moonalice, the half bassett/half god whose dancing brought new hope to hippies along the Northeast Extension. Pokito's brand of new hope consisted of fine weed and fine music, energized by the occasional hoagie ... He is the spirit beneath Havana, so we recommend you take two puffs and then pass.

Notes:
Jason Crosby played keys and bass, beginning with You and Me.
Moonalice played and/or sang on Congo Square, Are You Ready For the Country, Like a Rolling Stone, I Shall Be Released
Broadcast included Brothers Keeper set

This was my First. I had never been to Havana either. The night before Jason and all were at Levon's Barn. The Barn had posted about it so up the road to New Hope ! One of my better life choices xoxoxox 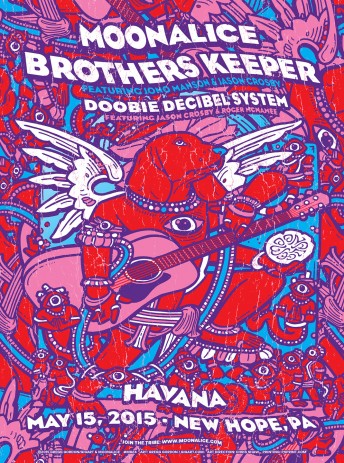