According to Moonalice legend, the legalization of marijuana is a beautiful thing. And it was a very long time coming. When the Feds made cannabis illegal in 1937, the motivation may have been a desire to clear the way for nylon, as well as to give the FBI something to do after the end of Prohibition. At the time, hemp was a strategic crop, supporting a wide range of military and industrial applications. Fortunately, the Moonalice didn't get the memo about weed being illegal, so we continued to innovate. Tonight's poster by Ron Donovan depicts one of the great innovators, Chief Legal Weed Moonalice, who ran Colorado's first dispensary beginning in 1938. Chief Legal Weed invented many things, including the first steam powered vaporizer. Today would have been his 125th birthday. Somewhere he is gazing down on us through a cloud of smoke. 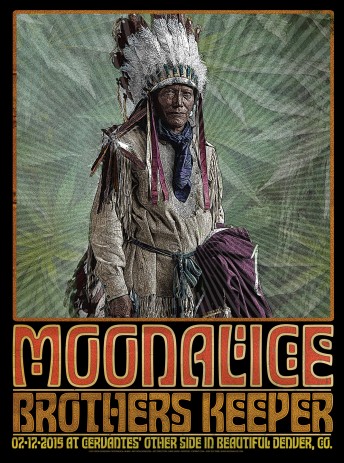