According to Moonalice legend, our tours over the last five years have blanketed the northeastern and western United States, but missed the rest of the country. When you can play in Pacific Grove, why would you play anywhere else? But every once in a while we need to expand our horizons. This year we decided to tour the south, specifically North Carolina and Mississippi. Raleigh. Durham. High Point. Rocky Mount. Fayetteville, Mt. Pilot, Hickory, Boone. Greensboro, Charlotte. Jackson. Oxford. Gulfport. Yazoo City. Biloxi. Pascagoula. Meridian. Philadelphia. Natchez. 60 dates spread over three months. As one presidential candidate might say, it was gonna be yoooooge. It included some of the finest bathrooms in the south. But it's not going to happen. We are hereby cancelling the whole tour. We stand with Bruce Springsteen and Dead & Co. in opposition to discrimination against anyone! We categorically oppose bathroom gender policing, a form of discrimination we could not have imagined until a month ago. As depicted in Dennis Larkins' incredible poster for today's show, the Moonalice is committed to civil rights for all humans, all animals and really smart cars and robots. We also oppose the designated hitter.

Notes: Show delayed by rain for 1 1/2 hours. We played one long set instead of three shorter ones.
- This show dedicated to the amazing fans who survived continuous rain in Pacific Grove ... You made this show special for us!!! 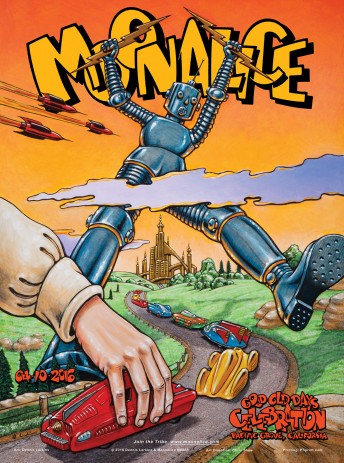