According to Moonalice legend, the Uptown Theatre was rocking after the last time we played here with Marshall Tucker Band. August 22, 2014. It was a rocking day. It was rocking even more intensely the next day, when there was an earthquake. The ceiling of this theater fell down! Fortunately, no one was hurt. Tonight’s poster by John Seabury depicts something you may not know: our band has a rescue dog!!! Her name is Uptown. Given that the doggy has the same name as this theater, we brought her last time we played here. She liked it so much she remained after we left … and was here when the earthquake hit. We were very concerned until the next day, when Uptown came home with her tail between her legs. She has been on the couch ever since. Reluctant to leave the couch, Uptown asked us to pass along this message: woof!

No Tribe members have listed their attendance for this show yet. 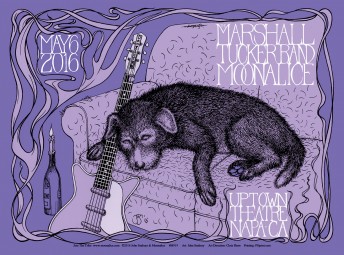