According to Moonalice legend, the trains are always on time in Oakdale. You see, Oakdale is an important stop on the Overground Railway ... the not-so-secret system that cannabis farmers use to bring their crop to market without running afoul of the forces of temperance. As depicted in tonight's poster by Alexandra Fischer, the Overground Railway was also a major party, especially in late August, a month before the harvest. At some point, someone got so wasted he thought he saw the Sierras. Look around you. Do you see the Sierras? Me, neither. Which proves that the party must have been pretty epic. That's when they started calling it the Sierra View Music Festival. 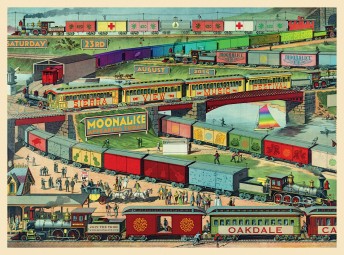