According to Moonalice legend, Moraga was founded by Joaquin Moraga, grandson of the man who designed the Presidio of San Francisco and founder of the pueblo that became San Jose. Joaquin got the land grant in 1835 ... but somehow, Moraga did not officially become a town until 1974. How could that be? We consulted the Moonalice legend and found the answer ... scandal! It turns out that Joaquin Moraga's grand daughter twice removed was an enthusiastic dancer. Her name was Zsa Zsa Moraga Moonalice. As today's poster by Darrin Brenner shows, Zsa Zsa never stopped dancing ... her dancing was infectious ... it caused every woman around her to twirl like crazy. As you might have guessed, the menfolk were scandalized by the sight of joyful women ... so they put Zsa Zsa in a convent where she was known as Sister Mary. The men then moved to Sacramento. Fortunately, the story has a happy ending. The nuns liked a Sister Mary's dancing so much, they made her a saint and named a college after her. 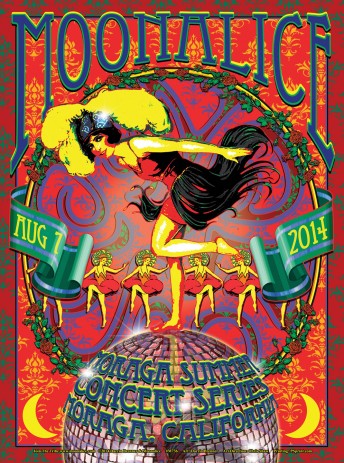