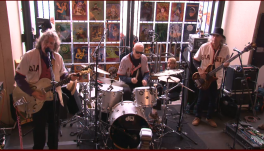 According to Moonalice legend, Jerry Garcia was a terrible. But at least he was inventive. Jerry didn't like to bend over, much less dive for the ball, which reduced his effectiveness with a glove. Tonight's poster by Chris Shaw shows Jerry going old school at third base, forsaking a glove for a 38-ounce bat. The bat was no more effective than Jerry's glove at keeping runners off base ... but it saved a lot of runs. No baserunner ever dared go past second base!

Jason Crosby played bass on Nat Fade Away in the Triples Alley set.

I am very excited about this show and I plan to be there - I also have two extra tickets at the Club Level if you are interested - please email me at anotherjg@yahoo.com - paid 109 each but will work with ya!! (((Moonalice)))

Will this be like last year, with 2, separate sets, one at the bar & the other atop the dugout? 5 starts simply because the band rocks so tremendously righteously that just about any show of theirs could merit 5 stars from somebody, & most of their shows certainly do the trick for me. Is Facebook the better venue for these questions? 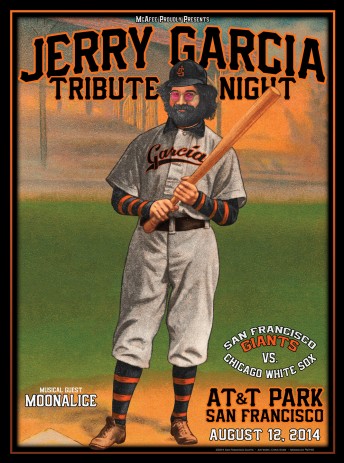