Moonalice legend also holds that quality control is of paramount importance. The tribe has long believed in the power of testing its products, often at the gatherings known as gigs. In the years since the prohibition of hemp, the tribe has sought to diversify its testing services. We discovered that tribe members in Ames are part of that diversification. Ames is home to the National Animal Disease Center, where "all American Mad Cow Disease samples are tested, among other things." Moonalice tribe members know what those "other things" are. Everyone knows that the best way to mollify a grumpy cow is to feed her some prime hemp buds. Works every time.

The band's journey to Ames is a new chapter in the legend . . . or a possible sequel to Spinal Tap. We left Davenport after the gig in a bus with no snow tires and a driver from Florida who didn't like winter driving. We got on Highway 80, went a couple miles and stopped. Black ice. The driver didn't want to go on. We pulled off the road in the lovely town of Walcott and spent the night at a Day's Inn. By the time we got to Ames - only 193 miles from Davenport - it was 3:30 the following afternoon. Tea Leaf Green, which left Davenport twelve hours after we did, arrived only five minutes behind us. It didn't matter. The gig was awesome. 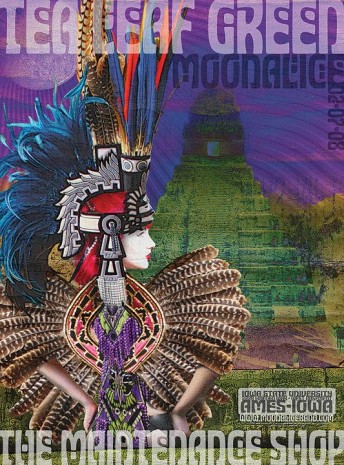