Twenty-eight years ago today, in what qualifies as the prehistoric days of the modern Moonalice tribe, Chubby Wombat and Blue went out on their first date. According to Moonalice legend, the Jerry Garcia Band was playing at the University of New Haven gym. On the set list that night was Chuck Berry's Let It Rock. An explosion of hormones has caused memories of the evening to be sketchy, but both parties recall that it was the beginning of something amazing. Chubby and Blue recall that the air freshener in the UNH gym was overpowering, which may have contributed to a loss of detail, consciousness, etc.

The ten-show Whiter Shade of Frostbite tour concluded in Chicago's Park West with Moonalice and Tea Leaf Green on stage together for Goin' Down the Road Feelin' Bad, with a chorus of 400 audience members shredding their vocal chords. Huge thanks to TLG and its wonderful crew for a great tour. 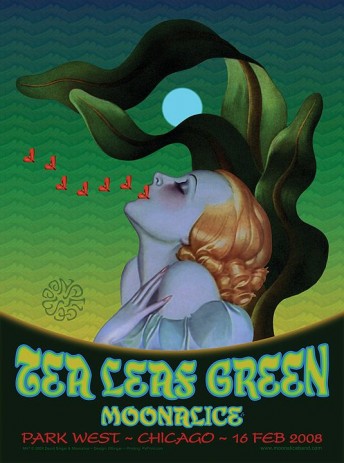