Share
Facebook
Twitter
+
VIDEO COMING
Previous Shows
Find           Show
Next Shows
The Fillmore - San Francisco, CA
view »
Park West - Chicago, IL
view »
The Music Mill - Indianapolis, IN
view »
House Of Crave - Columbus, OH
view »
20th Century - Cincinnati, OH
view »
The Ark - Ann Arbor, MI
view »
The Rave/Eagles Club - Milwaukee, WI
view »
University Center - Stevens Point, WI
view »
Cabooze - Minneapolis, MN
view »
The Maintenance Shop - Ames, IA
view »
VIEW MOST RECENT SHOW »
The Jewish Mother - Virginia Beach, VA
view »
The 8x10 - Baltimore, MD
view »
Sellersville Theater - Sellersville, PA
view »
Mr. Small's Funhouse - Millvale, PA
view »
Highline Ballroom - New York, NY
view »
Toad's Place - New Haven, CT
view »
Revolution Hall - Troy, NY
view »
High Fidelity - Rochester, NY
view »
Higher Ground - Burlington, VT
view »
The Paradise - Boston, MA
view »
VIEW MOST RECENT SHOW »
Moe's Alley IN SANTA CRUZ, CA
0
I was there
Buy Poster
Legend
Media (6)
Comments
Who Was There?
According to Moonalice legend, Bissextile Day - or Leap Day, as it is known to the tribe - is too high a holy day to last only 24 hours every four years. The ceremonies typically spill over to March 1, which turns out to be a high holy day of another kind - Beer Day! Distant cousins of the tribe who live in Iceland report that their country re-legalized beer on March 1, 1989 and now celebrates the anniversary. March 1 also happens to be the anniversary of the first day of the Salem Witch Trials, a miscarriage of justice that has been a burr under the saddle of Moonalice tribe members for nearly four hundred years. If you're having trouble keeping all this straight, you should have been with us at Moe's Alley, because it all made sense there. 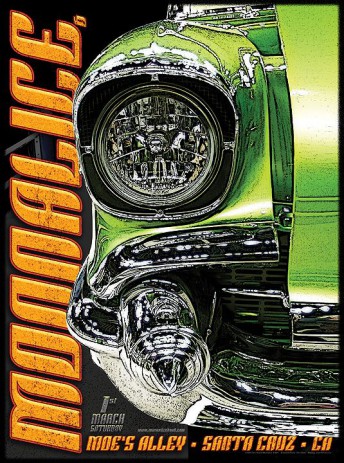