Like so much of Moonalice culture, Clownstock adapted to survive. Its present home is Camp Winnarainbow in Northern California, where the master of clown-emonies is Saint Misbehavin' himself, Wavy Gravy. As spiritual leader of the tribe in the Bay Area, Wavy had the honor of being the first to moon the band at a show. He also channeled the philosopher Confusion with his statement at Woodstock, "if you aren't sure, only take half."

Wavy was born this day in 1936, a birth date he shares with the great cartoonist Ralph Steadman. May 15 is also the birthday of Las Vegas (1905) and the Asylum for the Relief of Persons Deprived of the Use of Their Reason (1817), the first private mental health hospital in the United States.

One highlight of this great celebration: Ratdog guitarist Mark Karan joined us on stage for Tell Me It's Okay and Sugaree. 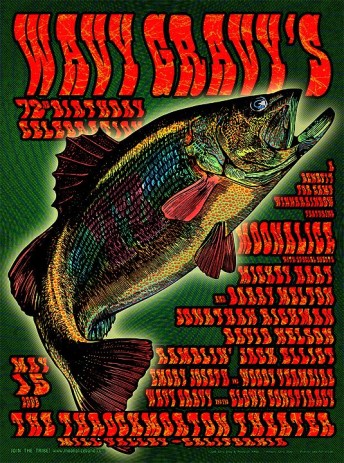