The band did some research and discovered a likely explanation for the tribal exodus: the leveling of Beacon Hill. Anyone who has spent time in Boston recently knows that Beacon Hill features a whole lot of expensive real estate, but not much elevation. This was not always the case. There used to be a real hill there, until the city decided to use the dirt of Beacon Hill to fill in the marshes in what is now Haymarket Square. What the city fathers did not realize at the time was that Beacon Hill was way more than a hill. It was a Moonalice burial mound. (For an explanation of Moonalice burial mounds, see the History for April 15, 2008). The Moonmothers of ancient Boston had mighty big bongs, which accounted for the height of the Hill. The tribe was so thoroughly dismayed by the city's wanton disregard for Moonalice custom that it abandoned the area for nearly 200 years. It turns out that the tribe didn't stay away because of unresolved emotional issues. Nope. The explanation is much simpler. The tribe sampled so much of its own crop that it just forgot to go back. We hate it when that happens.

So Moonalice (the band) returned to Boston this day for its second visit in four months. It was the last show of a ten-show run with Jack and we celebrated with an extra helping of Howling Monkey. Yowzah! We may never come down!!!

By the way, the National Weather service reports that the odds of an individual being struck by lightning over the course of an 80-year life are 1 in 3,000. The probability of being struck twice in a lifetime is 1 in 9 million. Ignoring the odds, we played two different "Lightning" songs in the same night. Who says music can't change the world? 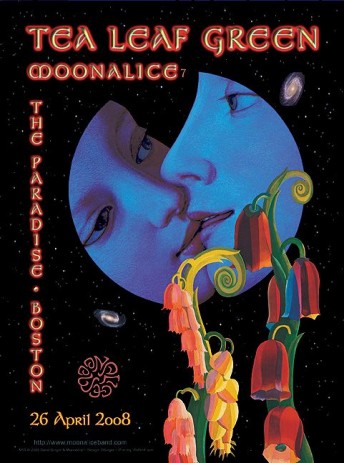