According to Moonalice legend, Union Square is home to a 96-foot monument called "Victory" that commemorates Admiral Dewey's conquest of Manila Bay in the Philippines. It also honors President William McKinley, whose assassination ultimately led to the creation of the National Park Service and the breaking of America's corporate monopolies, which in turn got Teddy Roosevelt's face onto Mt. Rushmore. Today's poster by Wendy Wright depicts the beautiful statue at the top of the monument, modeled after Alma de Bretville, an "actress" whose mighty trident represents the three prongs of San Francisco culture: cold weather, free music, Giants baseball, and fine weed. That's actually four prongs, but that's okay. That's how we roll here in San Francisco.

Nick of Time - What a bad ass song that is, and with an awesomely bad ass jam. One of my favorites. 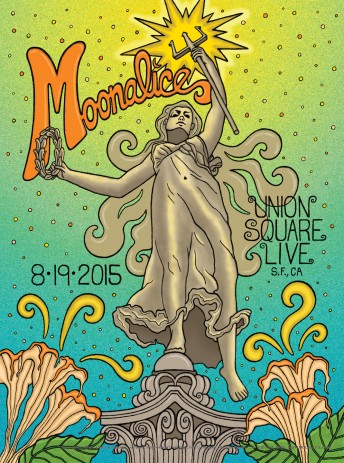