According to Moonalice legend, band names are really hard to come by. So hard that bands sometimes go to extreme lengths to protect them. We have some experience in this regard. As depicted in tonight's poster by Carolyn Ferris, a band called the Four Allisons from the Moons of Saturn took exception to our name. They thought we should have called the band Moonalison ... in honor of them. Where some bands might have sued, the Four Allisons went straight to DefCon 1: they stole our weed. We had a long negotiation, and in the end we cut a deal ... they gave us our weed in exchange for us putting them on a poster.

The moral of the story? Ars gratia weedus. Art for weed's sake ... is fine art, indeed. 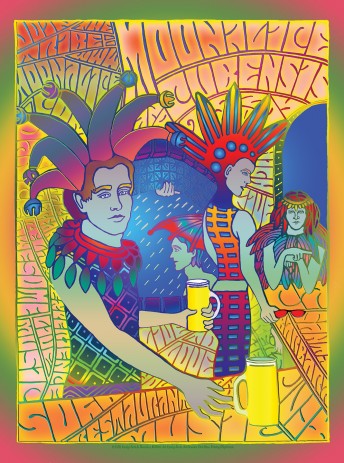