According to Moonalice legend, no one who was here will forget 9/9/15 and the Lockn' Microburst. The wind blew over everything in sight, from porta potties to heritage oaks. Some said it was an act of God. We won't argue with that -- we saw the video -- but we wondered which god would do something like that. We found the answer in the Moonalice legend. It was Moron, the Egyptian god of bong water spills. As depicted in today's poster by Dennis Larkins, Moron feels really bad about wrecking the site and forcing the cancellation of yesterday's music. He wants to make it up to us ... he was going to send a lovely rainbow ... but we told him that rainbows are old hat to us Deadheads. So Moron is sending along some amazing music to make this the best Lockn' yet. So if you hear something you like, you know where it came from.

I'm very happy to say I broke my Moonalice cherry on the Lockn Fest TourGigs webcast! Somehow even as I've heard the Moonalice legend for many years I've somehow missed the musical magical mystery tour of this wonderful conglomeration of outstanding musicans But I'm glad to be aboard the good ship Moonalice ! I've seen John Molo many times with Phil and Pete Sears back in the early Starship days and it's great to see him still out there sounding even better 40+ yrs. later Barry I 1st heard during the Sat. nite Phil set which really didn't do him justice being kind of lost in the mix ,but Fri afternoon's set I got to see this extraordinary guitarist shine! Steves guitar and vocs reminded me of the old Quicksilver, Byrds days And Jason is the perfect all around musician to fill out this musical powerhouse Thank You for this great music treat ! I look forward to many more musical journeys with Moonalice! 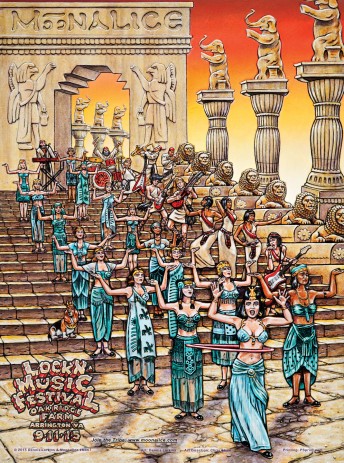