As is so often the case, the tribe found the place by accident. A few brave Moonalice souls walked down the dunes to the water. They got to the water's edge at precisely 4:20 and sparked a fat one to celebrate. No one knows precisely what happened next, but it appears the Moonalice dudes got so buzzed they didn't notice a mother bear as she swam to shore. She was not only pissed off - her cubs had both drowned en route - she was really hungry, particularly after one of the Moonalice gave her a couple hits off the fatty. At that point, the munchies set in and the mother bear ate one of the Moonalice tribe members. Very sad. It could have been much worse, but the mother bear fell asleep. At this point in the story, the tribe hit the road, the Chippewa and the National Park Service took over, the sun came out, there was a pretty rainbow, and those who survived lived happily ever after.

On this run in Ohio and Michigan, Steve Parish uncovered a major new figure in the Moonalice legend: Red Barns. According to Moonalice legend, the tribe faced many philosophical challenges over the millennia. One of the most significant occurred in the middle of the 19th century, when a young tribe member in the agricultural clan, Touchofrouge Moonalice, agitated for radical change. He wanted the tribe to focus on corn and moonshine, rather than hemp and Moonalice. Once they recovered from the initial shock of the proposal, the tribe resisted for many years, until finally Touchofrouge packed up his still and his combine and left the reservation. He changed his name to Red Barns and campaigned for years on behalf of corn, moonshine, ethanol, and related products. Red built a huge following in the Midwest. Followers by the thousands planted corn and built large, brightly colored, wooden storage structures to honor their leader. Given that corn farming takes a lot more work than hemp farming, it is no surprise the vast majority of Red's converts came from outside the tribe. Big Steve assures us that the next chapter in the story of Red Barns includes great peril for the Moonalice tribe. So tune in next time for another installment of "Who the Hell is Red Barns?" 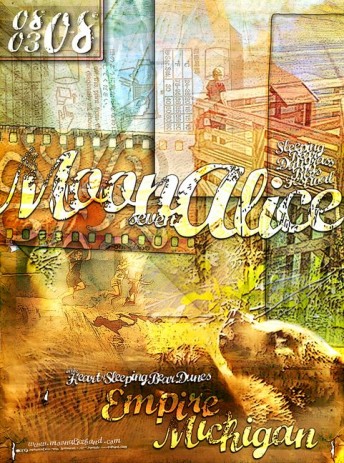