LAUNCH PLAYER
Share
Facebook
Twitter
+
VIDEO COMING
Previous Shows
Find           Show
Next Shows
Castaways - Ithaca, NY
view »
Dead On The Creek - Willits, CA
view »
Don Quixote's - Felton, CA
view »
Dunegrass - Empire, MI
view »
Grateful Garcia Gathering - Thornville, OH
view »
Grateful Garcia Gathering - Thornville, OH
view »
Crystal Bay Club - Crystal Bay, NV
view »
Mystic Theatre - Petaluma, CA
view »
Great American Music Hall - San Francisco, CA
view »
Private Event - Petaluma, CA
view »
VIEW MOST RECENT SHOW »
A Bear's Picnic - New Columbia, PA
view »
Commons Beach - Tahoe City, CA
view »
Union Square - San Francisco, CA
view »
Whiskey Jack's - Big Sky, MT
view »
Whiskey Jack's - Big Sky, MY
view »
Headliners Music Hall - Louisville, KY
view »
Mercy Lounge - Nashville, TN
view »
40 Watt Club - Athens, GA
view »
The Pour House - Charleston, SC
view »
Eugene Celebration - Eugene, OR
view »
VIEW MOST RECENT SHOW »
Summer Sounds IN GREENSBURG, PA
0
I was there
Legend
Media
Comments
Who Was There?
According to Moonalice legend, Greensburg, Pennsylvania began its life as the village of Newton, a stop along the wagon trail from what is now Pittsburgh to what is now Philadelphia. Right after the Revolutionary War, a colonial veteran established an inn right here to cater to teamsters driving wagon loads of hemp from Fort Pitt in the Three Rivers area to Philadelphia. As you may know, hemp was the most important crop in America in those days, due to the essential role of ships of sail in the colonial economy. That first crop of hemp from the Three Rivers region produced excessive flowers, which made it unsuitable for rope. Luckily, ol' Big Greens Moonalice was sleeping off a hangover out back of the inn in Newton. He arose from his stupor just long enough to demonstrate other uses for flowery hemp, saving the crop and the day. Everyone rejoiced! Philadelphians loved the new hemp products, which caused them to love each other as brothers. And the people of Newton immediately changed the name of their village to Greensburg. The rest, as we say, is legend.

According to Moonalice legend, education is really important. Especially higher education. That's why we were pleased to see that the University of Pittsburgh at Greensburg campus is located in Hempfield Township. Everyone there gets a full Moonalice education. And the local secondary school is called Hempfield High. We are not making this up. Chubby has a Spartan hat to prove it.

According to Moonalice legend, Acadians are French-speaking Canadians who may or may not have been affiliated with the tribe. Uncertainty exists because no one in the Moonalice tribe really knows what an Acadian is. However, they sound like nice people. Plus, they got pushed around a lot, which is also true of the tribe. We raise this because August 15 is Acadian Day. We encourage you to salute Acadians tonight with the herbal remedy of your choice. They may not appreciate it, but you will. 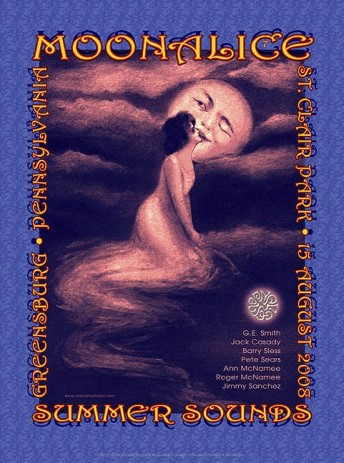