According to Moonalice legend, the Jurassic period saw some unusual dinosaurs around Laurelton. Our favorite was the Brown Nose, Blue Haired Cross-Eyed Potapus. This giant herbivore was an eating machine, but its diet consisted entirely of hemp. It spent its day in the hemp fields, chewing intently. When it was full, the Potapus would pause for a few minutes, which led to serious munchies, after which the Potapus would go back to lunch. Every morning, the Potapus would poop out masses of hard black crystals to clear the decks for another day of eating. Unfortunately, hemp is a seasonal crop in central Pennsylvania, which caused the Brown Nose, Blue Haired Cross-Eyed Potapus to die off every winter. The Potapus didn't last in Pennsylvania, but the carcasses decayed over the millennia, leaving behind huge pools of light sweet crude. Potapus poop, of course, turned into anthracite coal.

According to Moonalice legend, the tribe's nemesis is a creepy figure called Red Barns. Red was the oldest of three Barns brothers, and by far most violent. Brother Whitey was pretty random - sometimes good, sometimes not -- but the third brother, Smokey Barns, was a good soul. All three are immortal. Whitey and Smokey have tried for centuries to protect the Moonalice tribe from the evil brother, Red. The battle rages on in rural areas across the country. Each side colors its battlements distinctively. The ones at Bear's Picnic are smoky yellow, a clear sign that this festival is under the protection of Smoky Barns. But don't get overconfident. Avoid Red Barns. You'll find no empathy there.

Did you know that August 16 is Xicolatada? We thought not. It's a traditional festival celebrated only in a village in Catalonia. It has been a rite of summer for over 300 years.

According to Wikipedia, August 15 - it seems like only yesterday - was once a festival day in Catalonia, and the locals in the village were known to drink quite a bit, to the point that many still felt ill the following morning. Wikipedia goes on to say that the village chocolatier would offer the people a hot chocolate to ease the pain, as he claimed cocoa was an excellent remedy. Over the years, this act of charity grew into a custom, and eventually a municipal association was formed to remember the tradition and to organize the distribution of hot chocolate every year on August 16, at precisely 11 in the morning. It sounds real enough, but that can't be the whole story. What happened to the party on the 15th? We need to consult the Moonalice legend. The hot chocolate was not a headache remedy. It was a cure for the munchies. The Catalonia tribe treated hangover the way they treated everything else: with heavy smoking of local hemp products.

Xicolatada appeqrs to have a discordian element. While the date is always the same, the organizers mess with the calendar somehow so that no one knows in advance when chocolate day is coming. Quite logically, the local Moonalice tribe smokes continuously, because they never want to be caught unprepared. 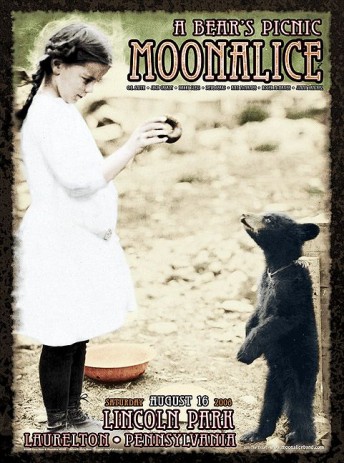