According to Moonalice legend, the first oil wells drilled in California were in Humboldt County. In the town of Petrolia, to be exact. The name turned out to ironic. The only oil they found was hash oil. The Oil Company was disappointed, but apparently the locals were okay with that.

According to Moonalice legend, tonight's poster by Alexandra Fischer depicts one of the great entrepreneurial disasters in Moonalice history. Our tribe has no aptitude for casinos, baseball or RV's, so we have to be scrappy to earn a living. One member of the tribe, Captain Ahab Moonalice, decided that the tribe should take advantage of the aging US population by getting into the cruise business. So far, so good. Unfortunately, they built the cruise terminal here on Blue Lake, which turns out to be otherwise landlocked. The tribe went back to farming.

According to Moonalice legend, today is the 47th anniversary of Dr. Martin Luther King's I Have A Dream Speech. 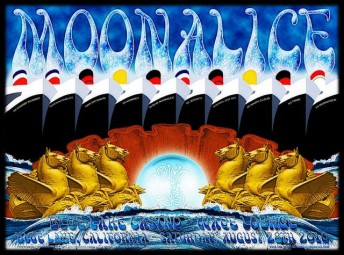