According to Moonalice legend, the Old Church here in Wilsonville was founded by Alfonso Boone, grandson of ol' Dan'l Boone, him that "kill't a bar when he was only three". Yes, that Dan'l Boone. Today's poster by the immortal Wes Wilson depicts Alfonso Boone's daughter, Daniella Boone Moonalice. Daniella was a vegan, so she grew cannabis instead of killing bears. That made her very popular with the bears, as well as the Moonalice tribe.

Daniella's cannabis was the best in Oregon. He secret was bear poop fertilizer. She favored "Shit In the Woods" brand fertilizer, which is no longer as widely available as it was when the Old Church was built, more than 100 years ago.

just seen a headline on rollingstone.com "102 best Nirvana songs".For Criminy's sake,they only made like 3 albums?5? and this is only the 102 BEST songs,out of how many?Sure Moonalice has a combined repertoire in the hundreds.They also have a combined total of years as songwriters probably in the three-figures.

What time is Moonalice set? 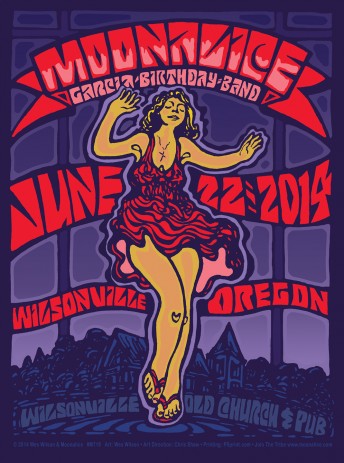