According to Moonalice legend, tonight's poster by Winston Smith commemorates two great events in the history of our tribe: the moon landing 45 years ago and the Trojan war in the 12th century BC. You all know the story of the Trojan Horse, right? I'll bet you don't know about the Trojan Space Ship. The Trojans weren't stupid: they would never have fallen for the Trojan Horse if they hadn't been distracted by the world's first rocket launch. Fortunately for the first astronauts, their wooden space ship landed on the moon. After some initial confusion the astronauts settled in to wait for reinforcements. They are still waiting ... 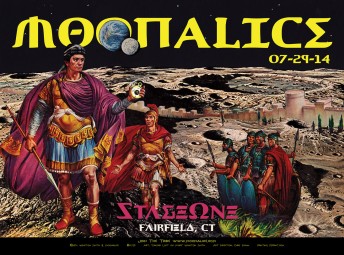