According to Moonalice legend, the tribe first came to the Jacksonville area looking for a fountain of middle age. Unfortunately, they found it.

According to Moonalice legend, the Jacksonville Fire of 1901 didn't really happen the way the history books say. Yes, the fire began in the kitchen in a mattress factory, but there has never been a satisfactory explanation for why no one alerted the fire department when the fire started. Now it can be told. The mattress factory was experimenting with new materials - alternatives to Spanish moss. That particularly week they were experimenting with hemp acquired from the Moonalice tribe. When the fire started, the place was overwhelmed with smoke. Within minutes, everyone within 10 miles was buzzed beyond belief. It just goes to show that you should never smoke a bed. 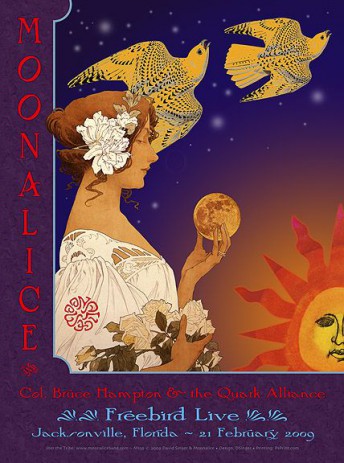