Jul 5, 2020 / Jason Crosby Shelter-In-Place Session #111 at Howling Moon Studios (Bay Area)
Our tour dates have been cancelled due to Covid-19. As Jason is "sheltering-in-place" at Roger's, daily D...
view »

Jul 2, 2020 / Jason Crosby Shelter-In-Place Session #108 at Howling Moon Studios (Bay Area)
Our spring tour has been cancelled due to Covid-19. As Jason is "sheltering-in-place" at Roger's, daily D...
view »

According to Moonalice legend, the tribe returned to Breckenridge during the first gold rush here. The tribe was far too lazy to dig for gold, but they were happy to do their tribal thing in gold rush towns. From Colorado to the Yukon, the tribe played a pivotal role in mining towns. The nomadic tribe played gigs, while the hippies supplied the miners with hemp products. So important was hemp to the miners that they would not do any kind of work without it. Which is why you guys switched from gold mining to ski areas. It was the only way to get the tribe to resupply you in the winter!

According to Moonalice legend, March 15 is the Ides of March. Julius Caesar met his maker on the Ides of March, but that's all any of us knows about Ides. What the hell are they? According to the Century Dictionary, Ides "comes from the ancient Roman calendar, the eighth day after the nones -that is, the 13th of January, February, April, June, August, September, November, and December, and the 15th of March, May, July, and October. The seven days after the nones in each month are identified by their ordinal numbers before the ides (the ides themselves included), as the eighth, seventh, sixth, etc., day before the ides." Huh? The tribe has a simple solution: light up and forget about it.

We played this show in honor of Charlotte Driebe. 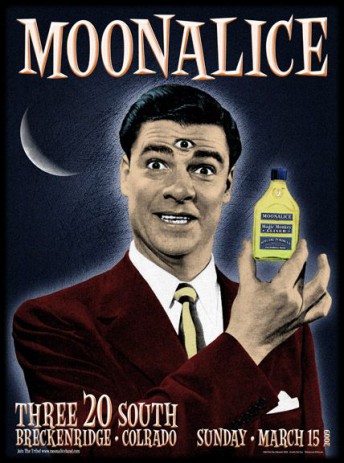