According to Moonalice legend, present day Redwood City has a long history with the tribe. In the old days, it was known as Redwood Farm. I'll leave it to your imagination to figure out what the tribe grew year. Over the years, the population grew a lot. First it became Redwood Hamlet. Then Redwood Village. After pulling a few all nighters, it passed the exams to be Redwood Town, then Redwood Borough. A couple centuries of keeping its head down and getting the job done, got this place got promoted to the big leagues: now it's Redwood City. Other than the one mistake of trading the redwoods for a Safeway, this place has done it right from the first day. Old school all the way.

According to Moonalice legend, this venue is named after an infamous femme fatale: Little Fox Moonalice. Little Fox was no ordinary Moonalice. For one thing, she was born on February 29, a lucky outcome which helped her stay young. From the moment of conception, Little Fox was one of a kind. In the womb, she kicked in a Bo Diddley beat . . . 24x7. She was born screaming, "Who Do You Love?" Nursing immediately after birth, she had a unique technique, which consisted of holding on to her mother's nipple with the thumb and index finger before she suck. Her habit of holding onto the nipple while looking around, caused papa to nickname her "Bogart." Every day of Little Fox's life was amazing. Stay tuned for more . . .

According to Moonalice legend, today (January 30) is the 161st anniversary of the day when Yerba Buena became San Francisco. It is a day of mixed emotions for the tribe. On the one hand, the handover of Yerba Buena to white people meant abandoning a great farm. But on the other hand, it got the tribe up to Mendocino and Humboldt, where tribal agriculture has flourished. 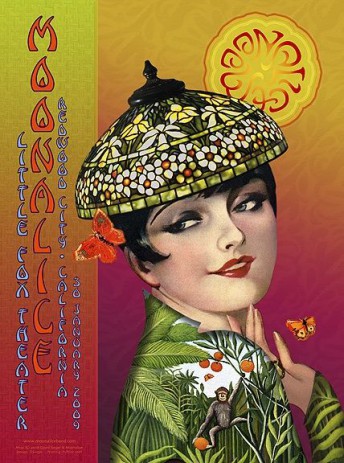