When Europeans first came here, they couldn't decide on a name. Apparently they were evenly split between Standing Peachtree and Standing Hemp. So they decided to pick another name. Somehow they picked Thrashersville. That was clearly too rough, so they built a railroad depot and changed the name to Terminus. They quickly realized Terminus didn't sound human, so they switched the name to Marthasville. That seemed a bit quaint, so they moved on to Atlantica-Pacifica. Unbelievable. The town hadn't been built yet and already they had sold the naming rights to a supermarket. At long last, someone had the bright idea of asking the townspeople, who picked Atlanta by a narrow margin over Standing Hemp. The rest, as they say, is legend.

According to Moonalice legend, peaches and hemp have always gotten along well. At some point along the way, the tribe decided to cross breed them. Amelia Betty Jo Moonalice had the greenest of thumbs and she devoted her life to developing Peachemp. She tried everything, but nothing ever worked. The fruit tasted like rope and the THC wound up in the pit. So in 1937 the tribe passed a law making Peachemp illegal. The country responded by making hemp illegal.

According to Moonalice legend, the War of Northern Aggression saw acts of heroism by the Moonalice tribe in and around Atlanta. The 420 Moonalice Signal Brigade under Col. Buford Thudpucker Moonalice were assigned to the defense of the city against the Dreaded Yankee General Who Shall Not Be Named. The brigade's job was smoke signals, but by 1865 they were pretty wasted. They had no idea what was going on, but they were determined to do their duty. All day long, they puffed and puffed, creating massive clouds of smoke. By the time the smoke cleared, the tribe found itself on the set of Gone With the Wind. 80 years had passed, and the brigade was having major flashbacks. Frankly, madam, they didn't give a damn. 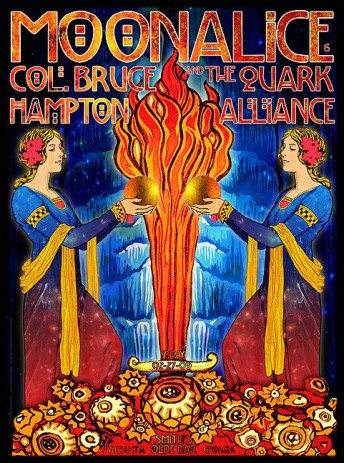