According to Wikipedia, the Chumash Indians were the first native tribe in the region now known as Los Angeles. According to Moonalice legend, our tribe was here way before the Chumash, but kept a low profile. Don't believe me? How else can you explain the name the Chumash gave this area? They called it Valley of Smoke. You can look it up.

According to Moonalice legend, tribal agriculture flourished in the area now known as Hollywood. Which is why the tribe called the place Hempwood. They even had a big sign on the hill. Unfortunately, there was a drought in 1885 and somebody smoked the sign. Then the white man came and changed the town's name. Try as they might, the Moonalice tribe could not keep pace. In 1910, the tribe tried its hand at movie making. Being Moonalice, they focused on low tones, producing the first talkie, which they called "Bud of a Nation". Unfortunately, the tribe never filmed any images, so the movie was totally black. This was good for smooching and smoking hemp products, but did not catch on broadly. Then the tribe tried its hand at the Chinese Theater business. They opened up on Hollywood Boulevard with a really cool attraction: they put actors' names on stars and used them as targets in the toilets. The Moonalice Chinese Theater was moderately popular with tourists until Graumann's opened up across the street. The rest, as they say, is legend.

According to Moonalice legend, on this day in the year 420, the matriarch Morning Glory Moonalice invented inhaling. For all intents and purposes, she changed the course of civilization, making possible not only the 1960s, but also Reefer Madness, Bill Clinton and several generations of disingenuous politicians. 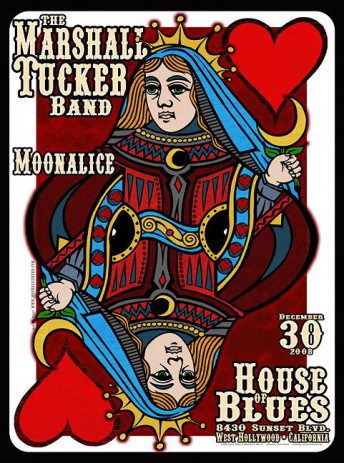