According to Moonalice legend, San Diego is the largest city in America with a Republican mayor. We applaud Mayor Sanders for his opposition to Proposition 8. Our next goal is to persuade him to support Prop 420, which would guarantee farmers the right to grow only female hemp plants.

Accordoing to Moonalice legend, today is the 42nd anniversary of establishment of the Principality of Sealand is established, ruled by Prince Paddy Roy Bates. Sealand was an offshore oil rig, but for some reason, the British did not take kindly to its attempt at independence. We don't understand that, but suspect the source of the controversy may have been agricultural.

According to Moonalice legend, today is Ganesh Chaturthi, the birthday of the Hindu god. Lord Ganesha, who was created by Goddess Parvati, consort of Lord Shiva, was part man, part elephant and all Moonalice. The Hindu legend says that Parvati needed someone to guard the door to her house, and created Ganesha out of the sandalwood paste. She had him stand guard at her door with instructions not to let anyone enter. When Lord Shiva returned from the battle, Ganesha stopped him from entering Parvati's chamber. Shiva, enraged by Ganesh's impudence, drew his trident and cut off Ganesha's head. Parvati emerged to find Ganesha decapitated and flew into a rage. She threatened destroy heaven and earth. In an attempt to pacify Parvati, Shive sent out his people to find a child, cut off its head and bring it quickly. The first living thing they came across was an elephant. That elephant was facing north (the auspicious direction associated with wisdom), so they cut off its head and brought it to Shiva, who placed it on the trunk of Parvati's son and breathed life into him. Parvati was overjoyed and embraced her son. As a result, Ganesh is worshipped first in all Hindu occasions and festivals. According to Moonalice legend, Ganesh is one of the greats, but we suspect there may be an angle related to Moonalice agriculture. The dude's got the body of a man and the head of an elephant. We love that, but we also want some of whatever his fans are smoking. Happy Birthday Ganesh! 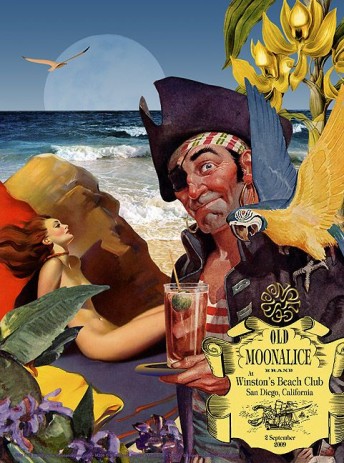