LAUNCH PLAYER
Share
Facebook
Twitter
+
VIDEO COMING
Previous Shows
Find           Show
Next Shows
Hangar on the Wharf - Juneau, AK
view »
Stillwater - Ashland, OR
view »
The Green Spot - Coos Bay, OR
view »
Silver Moon Brewery - Bend, OR
view »
WOW Hall - Eugene, OR
view »
Hi Dive - Seattle, WA
view »
Jewels in the Square (Union Square) - San Francisco, CA
view »
Don Quixote's - Felton, CA
view »
Hop Monk Tavern - Sebastopol, CA
view »
River Ranch Lodge - Tahoe City, CA
view »
VIEW MOST RECENT SHOW »
The Mint - Los Angeles, CA
view »
The Blue Cafe - Long Beach, CA
view »
Winston's Beach Club - San Diego, CA
view »
Lobero Theatre - Santa Barbara, CA
view »
Tower Theatre - Fresno, CA
view »
Fishlips - Bakersfield, CA
view »
Marin Civic - San Rafael, CA
view »
The Bash for Petaluma Educational Foundation - Petaluma, CA
view »
Jewels in the Square (Union Square) - San Francisco, CA
view »
Fox Theatre - Redwood City, CA
view »
VIEW MOST RECENT SHOW »
Haines Fairgrounds IN HAINES, AK
0
I was there
Buy Poster
Legend
Media (1)
Comments
Who Was There?
According to Moonalice legend, a cruise ship was sailing up Alaska's inside passage. The entertainment on board was a magician who had a parrot. Unfortunately for everyone, the parrot gave away every trick. "It's up his sleeve; up his sleeve." Or "It's not the same rabbit, not the same rabbit." This went on for days. As the ship approached Haines, the magician was getting more and frustrated. Then the cruise ship hit an iceberg and sank. The only survivors were the magician and his parrot. They made it to a tiny island on the Linn Canal and hung out there for two weeks without seeing a soul. For that entire time, the parrot said nothing. Not a word. Then one day the parrot shook his head and said the magician, "Okay. I give up. What did you do with the ship?"

According to Moonalice legend, the tribe has pioneered many new sciences, including cryptozoology, the study of animals that no one has ever seen. Haines is an emerging center for cryptozoology, with tribal cryptozoologists in hot pursuit of elusive creatures. On this trip, our focus has been on the arctic hippo. Little is known about the arctic hippo, except that prefers to live in streams or forests, it is nocturnal, and it spends the day disguised as a large, round boulder. We cannot confirm any sightings on this trip, but evidence of arctic hippos was everywhere. For example, yesterday there was a cruise ship in Haines. Need I say more? Okay. We went to the Chilkat River last night and saw bears and salmon. Bears and salmon are known markers for the arctic hippo. Please. Keep your eyes peeled. A sighting would mean everything to us. 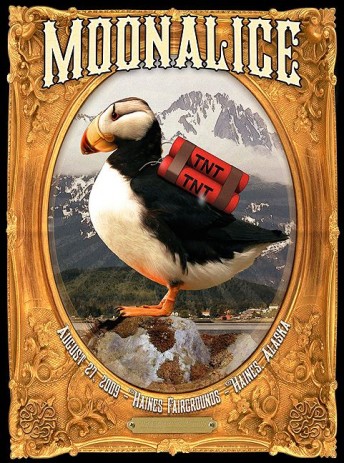