According to Moonalice legend, August 16 has historically been a momentous day for the tribe. On this day in 1962, Ringo joined the Beatles. In 1977, Elvis took a job pumping gas in New Mexico, ending his reign as King of Rock 'n' Roll, but beginning a long second career as an inspiration for impersonators and works of art painted on velvet. But the really big Moonalice news on this day occurred right here in San Francisco in the year 420. Apparently, that's when the local tribe started playing with matches. One thing led to another and pretty soon everybody was playing with matches, which would have been fine, except that a Moonalice matriarch by the name of Mission Dolores Moonalice pointed out that matches could be used to burn hemp, which might be more entertaining than burning your finger tips. The tribe gave it a try and everyone liked the results. The rest, as they say, is legend. 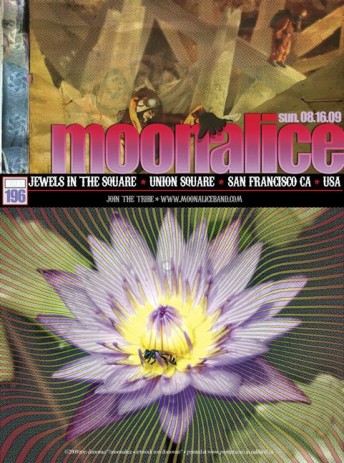