LAUNCH PLAYER
Share
Facebook
Twitter
+
VIDEO COMING
Previous Shows
Find           Show
Next Shows
Mr. Small's Funhouse - Millvale, PA
view »
Sellersville Theater - Sellersville, PA
view »
The 8x10 - Baltimore, MD
view »
The Jewish Mother - Virginia Beach, VA
view »
Moe's Alley - Santa Cruz, CA
view »
The Fillmore - San Francisco, CA
view »
Park West - Chicago, IL
view »
The Music Mill - Indianapolis, IN
view »
House Of Crave - Columbus, OH
view »
20th Century - Cincinnati, OH
view »
VIEW MOST RECENT SHOW »
Toad's Place - New Haven, CT
view »
Revolution Hall - Troy, NY
view »
High Fidelity - Rochester, NY
view »
Higher Ground - Burlington, VT
view »
The Paradise - Boston, MA
view »
Neighborhood Theatre - Charlotte, NC
view »
The Pour House - Charleston, SC
view »
Variety Playhouse - Atlanta, GA
view »
The Baby Grand - WIlmington, DE
view »
Rebel - New York, NY
view »
VIEW MOST RECENT SHOW »
Highline Ballroom IN NEW YORK, NY
0
I was there
Buy Poster
Legend
Media
Comments
Who Was There?
According to Moonalice legend, Manhattan Island has been a major center of tribal activity going back a millennium or two. Of course Moonalice was but one of many tribes that inhabited the New York area, but the records of Moonalice influence are widespread. The conventional translation of manhattan from the Lenape language is "island of many hills," but the Encyclopedia of New York and Wikipedia suggest a range of more likely alternatives. Our favorite comes from the Munsee dialect of Lenape, where the word manahachtanienk means "place of general inebriation." This is consistent with the Moonalice translation of manhattan, "place where prodigious amounts of hemp are consumed." We would also point out that the original European settlers in New York were Dutch. They called the place New Amsterdam, suggesting that they understood the value of hemp. Is it possible that the current Dutch enthusiasm for hemp products originated in the new world, rather than the other way round? Do you really need to ask?

We note that April 19 is Bicycle Day. We're not making this up. On April 19, 1943, Dr. Albert Hofmann did his first experiment with LSD. He took 250 milligrams, after which he had some difficulty speaking, so he asked his colleague to escort him home on a bicycle. That's when things got really interesting. Having survived a few hours of terror, Dr. Hofmann began to experience feelings of "good fortune and gratitude." He started to enjoy the hallucinations. He noticed that sounds had visual manifestations. He hung out for hours, feeling very good about things and eventually fell asleep. While the relationship of Bicycle Day to Moonalice or New York City eludes us, the anecdote explains the enthusiasm in some communities for April 19. But wait! There's more!!! On this date in 1927, Mae West was sentenced to 10 days in jail for obscenity in a play called, "Sex." Imagine that. Exactly a year later, the 125th and final installment of the Oxford English Dictionary was published. And this year, Moonalice and Tea Leaf Green played at the Highline. 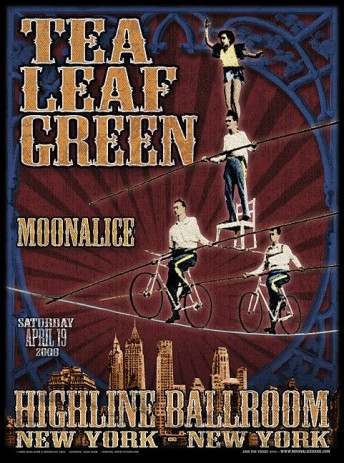