Among the many great people born in Virginia Beach was Grace Sherwood, the witch of Pungo. Fortunately, her name was cleared 300 years ago. Had it not been, we would have done the job ourselves.

If D-minor is the saddest key in music, April 15 has to be the saddest day in America. Not only does everyone feel the bite of tax filing, but history has dropped some really ugly events on April 15. President Lincoln died in 1865. The Titanic sank in 1912. Wikipedia said Jason Alexander died today, so we played the show for him. Turns out Wikipedia was wrong, which is a relief, especially for Jason. The Moonalice angle on April 15 comes from ancient Latvia, where Tipsa Diena is a day to celebrate the ploughing of fields. In modern times, Tipsa Diena is just another day to get ploughed.

This was the first time I had heard of Moonalice and only went because I am a huge Dylan fan and I heard G.E. Smith was a member of the band. I had to work the next morning at 5 a.m. so I was only going to go and catch a few songs and split but once the band started and I saw Jack Casady on bass right next to G.E. I knew it would tough to leave. I had a seat directly in line of G.E. and Jack and the next thing I knew almost 3 hours had passed! This was an incredible show and the set list was deep with highlights, Arrowhead(smoking), Somebody to Love(heavier and perfect with Jack there), Rolling Stone( with Chubby pointing at me and asking "How does it feel") and my first Tell me Its Okay. This show was one of the best! 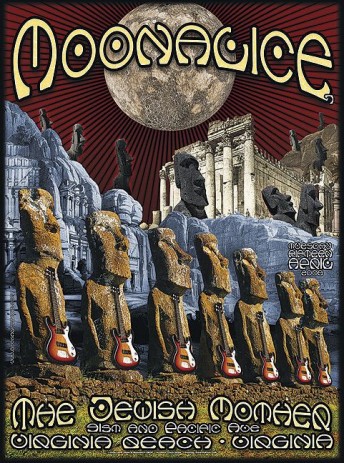