According to Moonalice legend, the white man who founded Phoenix, Jack Swilling, had Moonalice blood. How else can you explain a guy who shows up in Phoenix, where it never rains, spots the remains of ancient and abandoned Hohokam canals and decides to build a farming community? Like Salmon, the tribe always returns to its roots, and Ol' Jack's roots were in hemp farming. His ancestors had sharpened their green thumbs in these parts and pity the fool who tried to prevent Jack from doing the same. Jack was a tough man. He lived his adult life with a skull fracture and an inoperable bullet wound in his back. Wikipedia says Jack was dependent on "drugs and alcohol," which is hardly surprising for a guy committed to a life of agriculture in the middle of a giant desert.

According to Moonalice legend, Jack Swilling lived a wild life before settling down to grow hemp in what is now Phoenix. We were drawn immediately to Jack's service in the Civil War. He enlisted on the Confederate side. It appears that he was given command of the Arizona Territory's 420 Moonalice Signal Brigade. Using smoke signals, the signal brigade confused the Yankee soldiers and then got 'em wasted, leading to the capture of the Union captain James McCleve. At the smoke-out that evening, the soldiers on both sides realized that they were fighting by mistake. After, all it would be sixty years before Arizona would become a state, so technically they weren't even eligible to fight in the War Between the States. A few doobies later, they all passed out.

According to Moonalice legend, today - March 28 - is Serfs Emancipation Day in China. Actually, the Chinese created this holiday to make believe they had emancipated the serfs in Tibet. We in Moonalice know better. The serfs are not free. The tribe knows this and is determined to make amends. We support a free Tibet. That's right. At Moonalice, you get a free Tibet with the purchase of another Tibet of equal or greater value. They can't even match that at Wal-Mart. 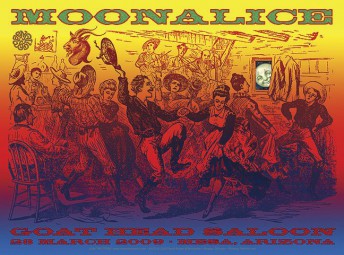