According to Moonalice legend, the tribe has had a huge influence on LA culture. Can you imagine LA without convertibles? Surfing without blonds? Gigs where people stayed until the end? Each of these reflects the influence of the tribe. Moonalice music and hemp were so influential that Angelenos found it attractive to get stuck in traffic. Then came World War II. That's when LA decided it had outgrown the tribe. Angelenos traded hemp for martinis; they traded psychedelic music for pop; and tribal tee pees for urban sprawl. We admit that LA seems to have prospered, but we at Moonalice think it's time to shake things up. We're back and we're bringing back the old school values: sex, hemp, and rock 'n' roll.

According to Moonalice legend, the tribe was responsible for making air pollution fashionable in the area now occupied by Los Angeles. Before Moonalice got here, the air was boringly clear. The sunsets were a total snooze. Into the breach stepped the tribe. They saw an opportunity to create killer sunsets and a communal buzz. They built a gigantic hookah in the Hollywood Hills and dedicated themselves to increasing the particulate count to the point where sunsets would include pastel greens, outrageous purples, and reds not found in nature. Their hard work paid off. Not only did LA get great sunsets, it got wasted from all the hemp smoke.

According to The Mint website, this club was founded in 1937. What the website doesn't say, is that there is a Moonalice connection. The tribe had a major revival in Los Angeles during the depression under the leadership of the matriarch Goodship Lollypop Moonalice. Goodship Lollypop was born in 1928. Blessed with amazing golden locks and a killer smile, Goodship became a Hollywood star at age 4 and helped America survive a brutal economy. In the process, she got filthy rich and needed some place to put the money. She was only a little kid, living in a time when banks were failing on a daily basis. First Goodship put her money under the mattress, but that made the mattress too lumpy for sleeping. Then she tried investing her wealth in tribal agriculture. That lasted only a few months, until Congress passed the Marihuana Tax Act of 1937 and effectively outlawed hemp. At that point, Goodship had a great idea. She decided to finance a nightclub on West Pico. She called it The Mint and hid all her money there in a secret vault, as you can see on tonight's poster. But Goodship started to grow up, and eventually spaced where she put the vault. The money has never been found!!! I bring this up because Goodship is now the senior Moonalice matriarch in these parts and she could use our help in finding her loot. So if you look carefully around you tonight, you may find her treasure. I'm pretty sure it's hidden behind Jack's eyebrows.

According to Moonalice legend, today is the birthday of a tribe member named Thomas Hee. Young Tom showed incredible talent for character animation and made a career of it, working here in LA for first Leon Schlesinger and then Walt Disney. His greatest work was the Dance of the Hours segment of Fantasia. But we bring this up because Tom Hee was blessed with the perfect name for a cartoon guy. He was always credited by his initial: T. Hee. 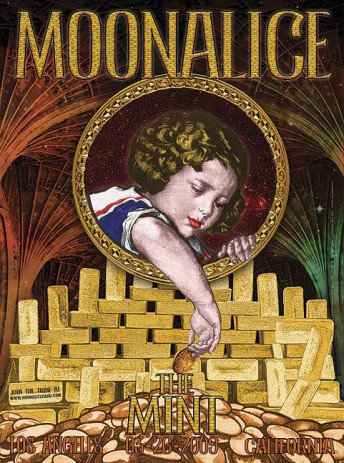