According to Moonalice legend, white people in North America celebrated New Year's Day on March 25 until 1752. This begs two questions: what were they thinking? How did it get fixed? History claims it was all the work of a Pope named Gregory. Moonalice legend, however, has the real story.

The tribe has always celebrated New Year's Eve on December 31 and New Year's Day on January 1. (The tribe also supports other interpretations, e.g., Hardwood Moonalice's New Year's Eve is August 31.) According to Moonalice legend, the tribe may have invited Pope Gregory XIII over for a smoke some time in 1583,. It was a friendly invitation that led to an evening of heavy partying. By the time it was done, the ol' pope was a full member of the tribe. Noting the obvious benefits of December 31 as a party night - particularly in comparison to a date in late March - the pope issued a bull. For those of you who are struggling to remember your church vocabulary, a papal bull is a proclamation. The same message, when it comes from a politician, is known as bullshit. In this case, though, the bull was truly inspired. The Julian calendar was invented by people whose astronomy was not quite right. As a result, the calendar got out of whack with the seasons and New Year's fell in late March. Greg the Thirteenth fixed it by dropping 10 days in October and moving new year's to January 1. Sensing an additional party opportunity, the Moonalice tribe added March 25 as Julian New Year's Day. Happy New Year!!!

According to Moonalice legend, the tribe still had a small outpost in Kern Island - present-day Bakersfield - when a gold prospector named Colonel Thomas Baker came to town. In those days, Kern Island was a swamp. Malaria was a huge threat. Fortunately, the tribe was ready with a solution: the never-ending smoke-out. The Mosquitoes got so buzzed that they flew from here to Death Valley. No word on what happened to Col. Baker. 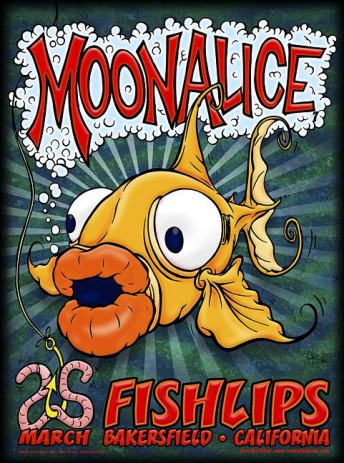