According to Moonalice legend, the people of San Diego have always favored water pipes. Is this true? We bring this up because we were perusing the legend for this town and came across the story of Western Moonalice, a plumbing contractor in this town in the early part of the 20th century. Western acquired a plumbing supply business and built a four-story building at 215 Seventh Avenue to house it. In many ways, the Western Metal Supply building was a standard warehouse. But it was special. The building was constructed to be a GIANT water pipe. Western and his friends would hang out on the roof - where the mouthpieces were - smoke up a storm and enjoy the view. They are reputed to have gotten so wasted that they thought they saw professional baseball games on the ground below. Ridiculous. Who ever heard of people watching baseball from the roof of a Metal Supply Building.

According to Moonalice legend, today is the 128th anniversary of the Moonalice riot in Basingstoke, England. The tribe is exceptionally peaceful. And exceptionally lazy, which has historically enabled them to avoid confrontation. But back in England in 1880, the Salvation Army came to Basingstoke with an emotional and evangelical campaign against alcohol. The tribe couldn't care less about alcohol, but it was a member of the Natives Against Temperance Organizations - NATO for short - and honored its obligation to defend against limits on self-medication. Apparently, some Salvation Army guy rang his bell one time too many and the tribe rose up in protest. The Mayor had to read the Riot Act and call out troops to put down the riot. Afterwards, the mayor invited everyone over to his place for a beer and a doobie.

According to Moonalice legend, San Diego is home to the Spreckels Organ Pavilion, the world's largest outdoor organ. The pavilion resulted from the world's largest organ transplant, but that's another story. Named for a bass player named Spreckels Moonalice, the organ originally consisted of 3,400 pipes. What could a Moonalice do with 3,400 pipes? Give that some thought. Recently, they expanded the organ to 4,518 pipes. The percentage change matches recent growth in San Diego's population. Coincidence? We think not.

Are you familiar with anapestic tetrameter? We'll give you a hint. There's no cure for it. According to Moonalice legend, La Jolla was home to the greatest poet of the 20th Century: Theodore Giesel, also known as Doctor Seuss. Moonalice legend is ambiguous on this point, but we believe the good doctor was a Moonalice on his mother's side. His books convey so much of the Moonalice philosophy that we believe Horton, Little Cats X Y and Z, and other Seuss characters are drawn from real life in the tribe. How else do you explain Green Eggs? A civilization that lives on a speck of dust? He described himself as "subversive as hell." He wrote mostly in anapestic tetrameter, a meter that goes "soft, soft, hard, soft, soft hard." To Doctor Seuss, the man who taught Doctor Steve Parish everything he knows. Stage plot reversed. 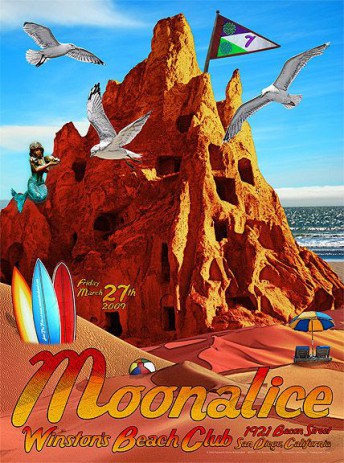