LAUNCH PLAYER
Share
Facebook
Twitter
+
VIDEO COMING
Previous Shows
Find           Show
Next Shows
The Pour House - Charleston, SC
view »
40 Watt Club - Athens, GA
view »
Mercy Lounge - Nashville, TN
view »
Headliners Music Hall - Louisville, KY
view »
Whiskey Jack's - Big Sky, MY
view »
Whiskey Jack's - Big Sky, MT
view »
Union Square - San Francisco, CA
view »
Commons Beach - Tahoe City, CA
view »
A Bear's Picnic - New Columbia, PA
view »
Summer Sounds - Greensburg, PA
view »
VIEW MOST RECENT SHOW »
Earthdance - Morning - Laytonville, CA
view »
Earthdance - Evening - Laytonville, CA
view »
Toad's Place - Richmond, VA
view »
FM 105.9 WTMT The Mountain! - Asheville, NC
view »
The Orange Peel - Asheville, NC
view »
142 Throckmorton Theatre (5) - Mill Valley, CA
view »
Band Joe & The Whyte Laydie (Warren Hellman & Moonalice 5) @ Hardly Strictly Bluegrass 8 - San Francisco, CA
view »
Hardly Strictly Bluegrass - San Francisco, CA
view »
Little Fox Theater (5) - Redwood City, CA
view »
Thirsty Ear (5) - Columbus, OH
view »
VIEW MOST RECENT SHOW »
Eugene Celebration IN EUGENE, OR
0
I was there
Legend
Media
Comments
Who Was There?
According to Moonalice legend, the tribe has long been committed to organic approaches to hemp farming. For centuries, the agricultural clan in what is now Eugene invested heavily in research to help nature do what it does best, only better. A century or two ago, the tribe had a breakthrough. As so often happens, the breakthrough was the result of random chance, rather than scientific method: a tribe member smoked way too much hemp, passed out in the woods. When he woke up, he discovered that his stash was covered in slime. Unperturbed, he lit up a fat one and discovered that the hemp was significantly more flavorful and exciting. When he got to the bottom of the bag he found the explanation: a previously unknown shell-less gastropod, which he named the Bud Slug. And every year thereafter, the tribe had a festival in September to commemorate this discovery. The Bud Slug Celebration has evolved over the years, but the important traditions remain. And we're glad to be part of it.

According to Moonalice legend, Eugene's founder, Eugene Franklin Skinner arrived in 1846 and built a cabin in a location that soon became known as Skinner's Mudhole. This part of the legend can even be found in history books. What the history books don't tell you is that Hemp was America's most important crop in the 19th century. When Skinner arrived, the Moonalice tribe was producing hemp on an industrial scale. Legend has it that Skinner saw a huge business opportunity in collaborating with the tribe. So he set up trading post and post office that became the business end of Oregon's first mail order hemp business. The rest, as they say, is legend. 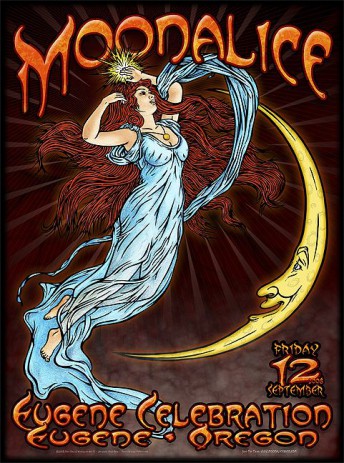