Do you believe that? We didn't think so. Fortunately, the legend reveals the true story. A long, long time ago, the Moonalice tribe lived in this area. They cultivated the tribal herb in mass quantities and called this place, "Hempgate." That's what it was called until the first white men came. They turned out to be a bunch of third-rate burglers who called the place, "Watergate." They gave way to a bunch of miners who called it, "Golden Gate." After that, we lost track. That's when Lindsay, Jesse, and Charles showed up.

According to Moonalice legend (and Oscar Wilde), if you want to tell people the truth, make them laugh, otherwise they'll kill you. This helps to explain why politicians don't need to be comedians, but musicians do.

According to Moonalice legend (and Mark Twain), you should be careful about reading health books. You may die of a misprint.

With Duke Davis on sax, and Mike Stevens on trumpet. 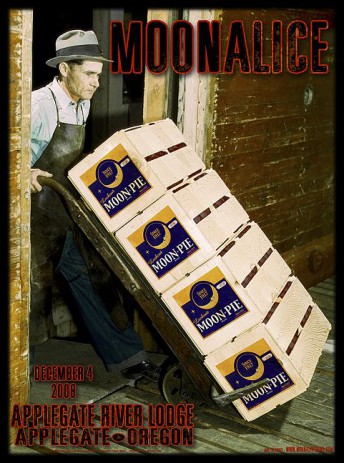