According to Moonalice legend, December 2nd is Stems & Seeds Day. Traditionally, it's the day when the tribe cleans out the ol' stash box to make room for freshly cured product from the new crop. As usual in the tribe, Stems & Seeds Day began by accident back on December 2, 1928. A ne'er-do-well bass player by the name of Blind Kumquat Moonalice was driving his Model T from St. Louis to Chicago with his bass and a trunk full of hemp buds. Blind Kumquat stubbornly refused to ask directions, which is dumb in any driver, but particularly so in a blind driver. He made a wrong turn, kept going for a week, and found himself right here in Eugene. By then, his trunk was empty.

Not knowing where he was, Blind Kumquat parked the car and pulled out his bass. He played a few songs for the local Moonalice hippies, but the music was no better than his driving. After a few minutes, the hippies suggested a ceremonial smoke. Blind Kumquat smoked up a storm and wound up coughing his lungs out. He didn't pass out until the hippies' stash box was cleaned out. With lots of room for fresh herb and no more music from Blind Kumquat, the tribe declared a high holy day. 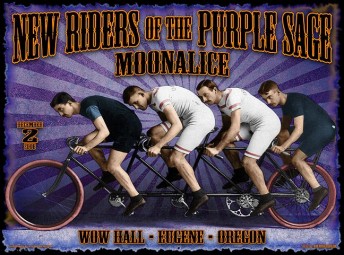