Our search took us to Charleston, where we found a major clue that took us to Atlanta and then Milwaukee, where the trail went cold. Then the great chief Buckhead Moonalice - who resides in Atlanta - found the Monkey Man himself . . . right here in San Francisco! How classically Moonalice; we spent two years searching the country for something that was right here under our noses all along. This morning, Harwood, Buckhead and I paid a visit to the offices of McKenzie River Company. There we had an audience with the medicine man Howling Monkey Moonalice and his team. We immediately recognized each other as members of the tribe - and exchanged the Moonalice salute. But here is the best news: we're going to get some more Monkey for Hardwood . . . and perhaps enough for all our fans!!!!

Henceforth, April 3 will be Howling Monkey Day in the tribe. All hail the Monkey!!!!! Best of all, the people who created the Monkey are here with us tonight. Please show them some love!!!!

According to Moonalice legend, the best way to see America is to stay awake and keep your eyes open.

According to Moonalice legend, on this day in 1860, the Pony Express completed its first successful delivery. Few people know that the Pony Express was the successor to a Moonalice delivery service called Pony Whenever. Pony Whenever was exactly what it sounds like, a very unreliable delivery service. The inventor, Notsoquick Moonalice, loaded up a pony with a bale of hemp and sent it off with a whack on the butt. The problem was it never occurred to Notsoquick to use a human rider, so the pony would run just far enough to be out of sight. Then it would stop, dump its load and eat the hemp. 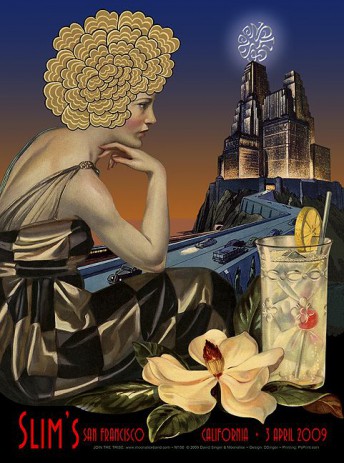