According to Moonalice legend, the Sancho Panza School for Sidekicks, originally located on this very spot in Felton, was one of the most important institutions of higher learning in America. Sadly, sidekicks went out of fashion a generation ago and the school quickly went to pot. But someone had a brilliant idea: they organized a Sidekick reunion. Most of the good sidekicks were dead, so the rest took something and held the held the reunion in their minds. It was fantastic. Harry von Zell got the Tonto Lifetime Achievement Award. Ed McMahon cheered everyone who spoke. Sancho Panza wasn't there, but he would have been so proud. Ditto for Don Quixote.

According to Moonalice legend, last Friday's show at Slim's was the first "live Twittercast" concert in history. Tomorrow night's show from Redwood City will be the second. This point is particularly meaningful as it represents the first known example of the Legend predicting the future.

According to Moonalice legend, today is the 142nd anniversary of the U.S. Senate's ratification of the treaty to purchase Alaska from Russia. The treaty was approved by a single vote, which might well have been that of Winthrop Montague Moonalice, a senator whose career was so obscure that few are even aware of his existence. It seems that Senator Moonalice had been smoking some fine bud he got from someone who might have been the great-grand-nephew of George Washington. He passed out in the senate chamber before the vote. Before long his body began to slide off his chair. But the Senator's sleeve caught on the arm, so that when the roll call reached him, his arm was up in the "aye" position. Eventually that led to Sarah Palin.

According to Moonalice legend, today is also the 144th anniversary of Lee's surrender at Appomattox Courthouse, which ended the War Between the States . . . or the War of Northern Aggression, as it is known in some parts. Present that day at the signing with General Lee was the 420 Moonalice Signal Brigade of Virginia, which had served the Confederacy so well. The brigade specialized in smoke signals, and are reported to have saved Savannah, Georgia from Sherman's army. After the ceremony, a distinct aroma arose from the Yankee side. The 420 Moonalice Signal Brigade of Virginia asked permission to examine the situation more closely. What they found astonished them. A large circle of Yankee troops passing pipes. It was the 420 Moonalice Signal Brigade of Pennsylvania!!! We all have heard stories of how that war tore families apart, but tribes? The two signal brigades spent the rest of the night comparing smoke signal techniques.

According to Moonalice legend, today's acoustic performance at KPIG was kosher. The tribe tries to be sensitive to the personal beliefs of its members, even if it can't understand them. This weekend is Passover to some, Easter to others, and Get Ready to Ship the Album for us. The moral of this story is . . . two bongs don't make a light. 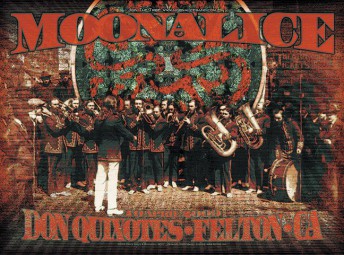