According to Moonalice legend, the tribe in these parts was led by one of the greatest Moonalice matriarchs of all time: Javelina Moonalice. With the benefit of hindsight - and a little bit of Spanish - it is clear that Javelina was a totally inappropriate first name to give to a baby girl. But Javelina was blessed. She was brilliant. She was beautiful. And she figured out how to cultivate hemp in the desert. You see, Javelina invented irrigation. It's hard to believe, but in ancient times Javelina diverted the Mighty Mississippi to irrigate her fields near present day Tucson. Her innovations changed hempiculture forever; their effects persist in the soil around here. We hope you take advantage of it.

According to Moonalice legend, in Chile today is Dia del joven combatiente. The holiday remembers those who disappeared. Wikipedia says the celebration features civil disorder by leftists and anarchists. We have a small piece of good news. A few of those counted among the disappeareds were Moonalice. They didn't really disappear. They just took a wrong turn and got lost.

According to Moonalice legend, today is the birthday of the racehorse Man o' War, as well as renowned presidential brother and brewer, Billy Carter.

Tonight's poster features Jalapeno Moonalice, one of the technical visionaires of the tribe. The poster is actually a primitive photograph, the first one ever of a Moonalice inhaling. 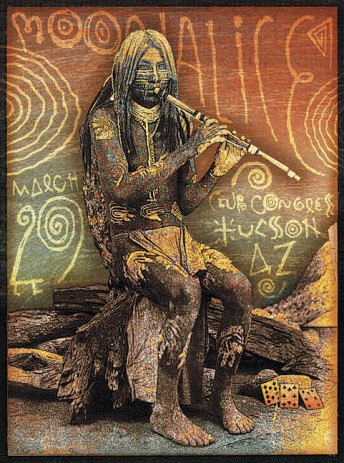